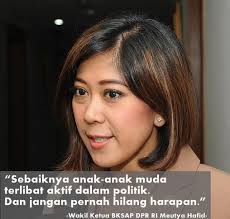 Agung Laksono's Functional Group (Golkar) party executive board has planned to reform the party's faction members and complementary committees at the House of Representatives (DPR), which were previously dominated by politicians loyal to Aburizal Bakrie.

Agus also introduced a number of faction members to fill important positions at the DPR's complementary committees, including Meutya Hafid, Agun Gunandjar, Charles M., Dave Akbarsyah and Gede Sunarjaya. However, Agus refused to specify the positions these people will occupy.

According to Agus, he had included Aburizal Bakrie's people in the plan, including Erlangga who was appointed as the chairman of Golkar party executive board in the national congress held in Bali.

"Therefore, we call on other faction members to join us," Agus said.

Golkar faction secretary Fayakhun Andriadi said that the plan to reform the party's faction and members of complementary committees would not need an approval from the DPR speaker. Fayakhun said that it was the party's prerogative’s right.

"It commonly happens at the House of Representatives," Fayakhun said.